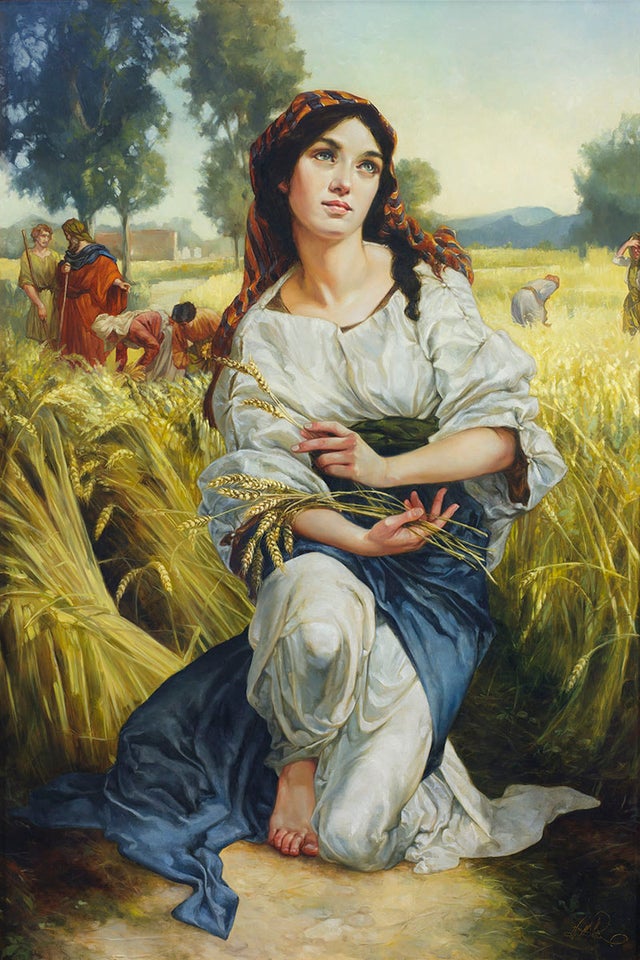 24 x 36 (75% size of original) on Birchwood board. S/N, hand embellished by artist, limited edition of 20 reproductions.

From Heather: While I have always been intrigued by the story of Ruth, the idea to paint her was actually suggested by Bruce Edwards, whom I met fall of 2014 and worked for the Church. He had mentioned perhaps painting her in the midst of gathering wheat, and so with that in mind, I set about coming up with concepts for sketches and preliminaries for the project.

The first resource I turned to, of course, was the Bible. I had read the story of Ruth many times and the history had even been recently discussed in depth during one of our Gospel Doctrine classes in church. But as I went over the book of Ruth again multiple times, the same themes that I had always heard were repeated back at me: it was a story of faith and trust, of leaving behind the world for God, of loyalty and family. As beautiful as any one of those themes is, none of them resonated with me for this painting. I felt particularly pressed by the idea suggested by Bro. Edwards of having her gathering wheat.

Why? I didn’t at first know, other than it would perhaps make her character more recognizable to the viewer. But I desired a more definitive answer to my own internal question. I prayed and asked; I read commentaries; I queried gospel teachers. All were indeed supportive, but I still felt empty-handed coming away and so the sketches went undone and the painting untouched. It wasn’t until I sat down with a very close friend of mine to discuss the struggle I was having with the piece that the Lord finally decided to answer me.

All during our discussion, I kept saying out loud to myself that there must be a meaningful reason for painting her gathering wheat. Two hours into our discussion, I was still baffled. Then, all at once, it was if someone had poured a glass of “something” over the top of me, because I could, very literally, “feel” the answer welling up inside of me. The image in it’s fulness was revealed to me as well as what it meant. There was no doubt in my mind, at that point, what I needed to do.

To describe the meaning of the painting of Ruth really only requires returning to the scriptures again. So often we read the stories, especially those in the Old Testament, and pass them off as histories that are interesting and that have valuable lessons about obedience, the side effects of sin and so forth. However, far less often, we view them as parables. Christ regularly taught in parables and he had a purpose in doing so. It was when I envisioned the story of Ruth more like a parable, while not diminishing it’s validity as a historical set of events, that I could see the answer to my question. And this is what was given to me:

Metaphors for wheat and the gathering of it can be found all through the scriptures, both ancient and modern. In the book of Ruth, Boaz, as the father of his fields, has set out to gather in the wheat of the season. He has commanded his servants with this task and what is left behind is offered to the poor and needy to glean, and Ruth is among them. Beyond the physical story being shared here, though, is something much more important and a metaphor commonly shared in our doctrine. In hindsight, the connection here now seems obvious, but the idea of it in relation to this particular bible story had never previously occurred to me.

Here, Boaz plays a similar role to Christ, overseeing the care of his responsibilities. He calls his servants—his Prophets, missionaries, bishops, ward priesthood leaders and so on—to harvest the souls of men, to gather them in to be saved. As inevitably as it will be in life, however, some souls are lost. They fall through the cracks and are forgotten. They remain in a field that was once white and ready to harvest but now seems abandoned. They didn’t get the chance or even lost the chance at being gathered into the garner.

But there is still hope—because the Lord, in his perfect love, has a plan for all the children of God. Ruth, in this painting, is a representation of the women in the gospel. As women, we may not be given the duties of leading the entire church or of holding the priesthood, but our calling is no less important. We have been equally called by the Savior to save those who have fallen behind, those who have been “lost” and those who feel that they were not worthy or fortunate enough to be gathered in safely at the harvest. We have been called to kneel on the ground and recover them one by one. The Lord needs the poor in spirit to lean into this labor of saving souls in the midst of the heat and toil of the day. As women of the church, we are called to this work. It is neither easy nor quick and the gleaning may only bring in a few, but as Christ, himself, said, “…if it so be that you should labor all your days… and bring, save it be one soul unto me, how great shall be your joy with him the kingdom of my Father!"