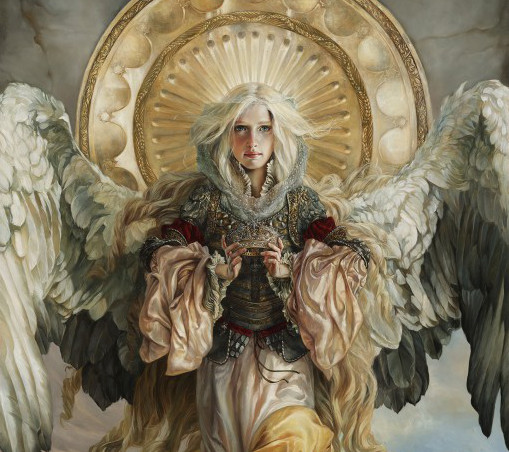 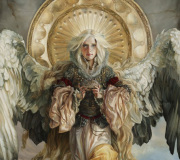 Triumph is the culminating masterwork to finish off a series of five paintings including  Temptation, The Rescue, Sanctuarii and Saraigh Ceol. The first four, in theme, visually portray  an experience of intimate, personal human conflict; the struggles that universally all humankind  must face in some form or another. Triumph, on the other hand, depicts the overcoming of all  conflict. Here, the central character rises above the temptations, trials, sorrows and evils of the  world in the form of the dragons beneath her—in essence all the forms of which Satan, the  destroyer, takes to bring us down into his captivity. She stands upon a rock, representing her  conversion to Christ, the foundation upon which she builds her life and testimony. The ‘rising  above’ comes line upon line, precept upon precept, and one act of faith upon another, thus  represented by the stones beneath her feet. Now that she has stripped Satan of all his power  through her righteousness, the dragons are bound—here literally with chains and fetters—and  can no longer touch her. Because they cannot destroy her and because all evil is self-defeating,  they turn upon each other in their quest for destruction. They have no other purpose. In thism  moment of triumph, she comes forward to be presented in the morning of the first resurrection,  portrayed in the scene behind. The wings are the grace of God, by which she is lifted up after all  that she could do to reach toward salvation. and she wears the armor of righteousness,  symbolizing the spiritual battle that was fought to achieve such glory and one that had continued  on from the pre-existence. At her shoulders are lions, the courage required to succeed; the  crimson on her sleeves, the sacrifice required to overcome and endure. On the breastplate, just  beneath the crown, is an emblem of the tree, here representing both the sealing of the ancestors  to their posterity, the roots to the branches, and the tree of life, which is the pure love of Christ  and the power by which that sealing is made manifest. About her head is a gossamer veil, the  resting of the Holy Ghost upon her to guide and make clear her thoughts toward God. Behind  her, emanating in brilliant gold is imagery of the wheat (the inner ring) and the tares (the outer  ring), separated in the last great harvesting of souls brought about through the power of the  priesthood (the overlapping squares symbol representing the Melchizedek priesthood). Because  she has been valiant, she has been gathered into the center of the inner ring and the look of peace  and assurance on her face exhibits confidence in her place. Lastly, the crown in her hands  symbolizes the crown of glory which she receives for her faithfulness. The pearls nestled in it are  the ‘Pearls of Great Price’ which she has given all she had to purchase in her desire for truth and  light. Also there are depictions of a star, moon and at the apex of the crown is the sun,  symbolizing the greatest of the three glories which she will receive in the Kingdom of God.  More than simply a representation of what I would envision receiving exaltation being like,  Triumph was created to be a symbol of hope. Hope that all can achieve this same glory and that  God will provide us a way to find it if we will but do what He asks, being faithful to the truth and  enduring in righteousness until the end.