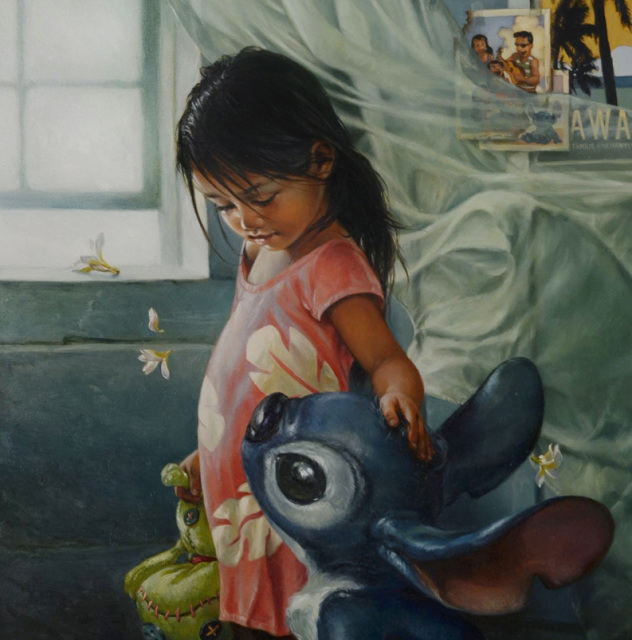 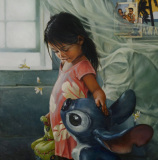 As fun and memorable as Lilo and her little alien companion are, the most  meaningful part about the Disney film Lilo & Stitch, to me, is the element of  family. And not just the concept of the ideal family, but what family really means.  In Ohana Means Family, I wanted to capture what that meaning is for me by  gathering together details from the film and placing them symbolically within the  image. To begin, at the top right is a photobomb from the film of the photographs that Lilo  keeps in remembrance of her lost parents, as well as the familiar poster of an  enchanted and perfect Hawaii—her past. The blowing curtain acts as a sort of veil between her past and her present, which is where she now stands beside Stitch. The window to the left is a symbol of the future and that it is still open and inviting. In the movie, Lilo and her sister, Nani, let go of the plumeria flowers into the wind, as if to show them letting go of the sadness of losing their parents. Yet to me, families are  forever. We never truly lose them and so those flowers, here, are floating back in through the window. Family isn’t about forgetting the past or languishing over  what may seem to be an empty future, but loving while in the midst of whatever may be. Family isn’t what we think our neighbors or friends have, because often, our perceptions are skewed or outright incorrect. Family is, however, remembering the good and making the most of the present. Even  further, in this painting, Lilo and Stitch are sharing what I feel is the true meaning of family: The act of giving love to one another completely, one hundred percent, and at the same time needing each other completely, one hundred percent, without guile or selfishness. A relationship like this isn’t impossible, but attainable. No, it may not be perfect, like Lilo’s handmade doll, Scrump, but it is perfect for them.

“This is my family. I found it all on my own. It’s little, and broken, but still good. Yeah, still good.”

Ohana Means Family the Back Story

I first started putting Disney characters into paint in 2013. A generous collector saw the first three that I’d finished (Cinderella, Merida and Mulan) and purchased them all, among several others of my independent pieces. Not only that, but he  requested and pre-paid for two additional Disney paintings and a huge fantasy commission to boot. When I asked which Disney characters he wanted for the yet-to-be-finished pieces, all he did was shrug and say that he was leaving that up to me. Who could beat that offer? That left the options wide open for me and I carefully considered which characters I would choose. To be honest, my first thought was to do a character that wasn’t one of my favorites. I’d given him a pretty great discount for purchasing so many paintings all at once, after all, and I thought I’d reserve my favorite characters for another client who may pay full price for it. Yes, I’ll agree, it was rather selfish… and short sighted. The first idea that came to me was of Lilo and Stitch.

To be honest, I wasn’t a big fan of Lilo and Stitch at the time. Mostly because every time my children had watched it previously (especially my young, identical twin boys), they turned into a  troop of little “Stitches” and went on a rampage around the house, destroying everything in sight. Oh, I understood the theme of family and whatnot, but it was lost in the craziness of an ill-behaved alien-turned-puppy-pet.

Needless to say, as I watched the film again and then immersed myself in the painting, as well as trying to share something more than just a surface representation of it, I began to fall in love with the idea—and then I felt it hit closer to home more than I ever thought it would. Suddenly, I understood. By the time I was putting the final brushstrokes on the board, I was fully, emotionally invested in the piece.

The collector, interestingly enough, had the same response to the idea of Lilo and Stitch that I originally did when I informed him the painting was finished (I never sent him any preliminaries of the painting). Sure, he’d agreed to any character I chose and had prepaid for it sight-unseen, but I don’t think he really wanted a painting of Lilo and Stitch either and it was evident in his voice when I told him over the phone the characters I’d chosen to paint. Luckily for me, however, he fell in love with it when he saw it. Little did I know the impact the painting would have or the fandom that revolved around those two “innocent” troublemakers. It soon became Disney Fine Art’s fastest selling out reproduction in their history and has since become recognized around the world.