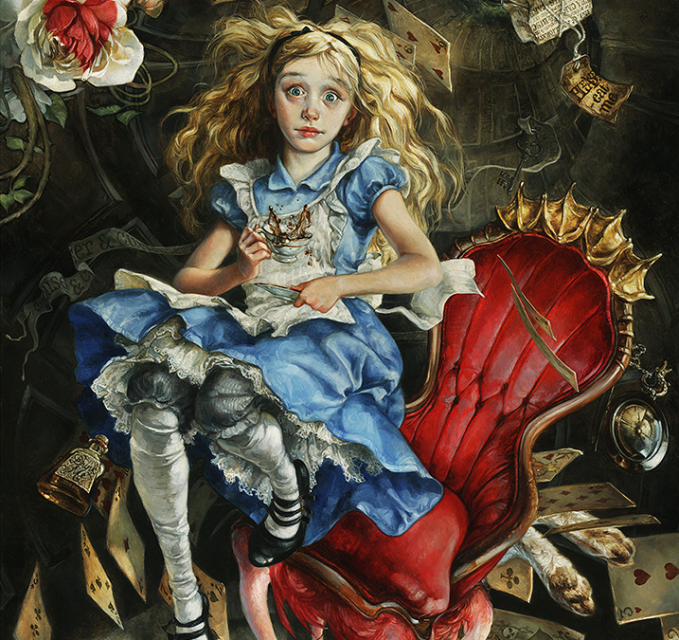 We’re All Mad Here is my most ambitious Disney painting to date. With the  plethora of ideas to draw from both the film and the original book, it took some  serious internal deliberation to determine what to put in it and what to leave out.  But the initial inspiration for the composition of We’re All Mad Here came from  Alice’s opening tumble down the rabbit hole in the Disney film Alice in  Wonderland, in which she ends up having to upright herself to be able to continue  forward into Wonderland. This sparked the idea that Alice should be “right side  up” in her own world and yet “upside down” in the world of the Hatter and the  other characters she meets. Hence, the painting was designed from that point to  hang both directions and was, in fact, signed on both sides.

With Alice Facing Up

The painting’s composition follows that of a playing card and resembles the card  for the Queen of Hearts, with the white roses being painted red on opposing  corners. Several elements are pulled from the story, such as the tea cake and its  label “Please Eat Me”, as well as the bottle of tonic and its label “Drink Me”. On  the paper that wraps the cake is a Victorian blurb of text in dedication to the  original author, Lewis Carroll. I also love the line when Alice states, “curiouser and  curiouser” and so I included that on the ribbon behind her attached to the key  which opens the door into Wonderland. The White Rabbit, true to his character, is  disappearing behind Alice’s falling chair. Among the wildly swirling set of cards  are snatches of other imagery from the film: The Queen of Hearts, who has her  own card (middle left side) and wouldn’t have it any other way than to have her  mug slapped somewhere on the picture; whereas the King of Hearts, the “shrinking  violet” of the two, has his card tucked behind the chair (middle right side).

With the Hatter Facing Up

On the flip side, looking at the painting with the Hatter and the March Hare facing  up, there are additional included items. Diverting oddities, like the “half cup” of  tea and the Hare trying to fix the pocket watch by pouring tea on it, rest in the  characters’ hands. In the sugar bowl is the snoozing Doormouse. Ideally, when I  paint any human character, I try to look for reference that mimics them as best it  can. I got lucky with the Mad Hatter. The original voice actor for Disney’s Hatter  was actor, Ed Wynn. It just so happens that his face looked nearly identical to his  character and so after some time searching for appropriate reference, I found  imagery that fit perfectly. In an effort to make a real link between the painting and  the film, I struck gold and got to use the quintessential model.

We’re All Mad Here was already a complex composition prior to adding any easter  eggs, but it just would not have been complete without throwing them in. The  painting and its associated story not only accommodate such complexity, but nearly  scream for it to be added. With Alice facing up, three of the easter eggs can be  seen. The first is found right in Alice’s hands. In the splash of tea bouncing out of  her teacup is an impression of Dumbo and his flapping ears. Appropriately attached  to the top of the White Rabbit’s pocket watch is Tick Tock (the crocodile) from  Peter Pan. The third easter egg viewed in this orientation is found on the face card  directly below the White Rabbit’s legs. Carefully researched to be placed on the  right card, the Joker of Diamonds, is the visage of Dr. Facilier from Princess and  the Frog. Viewed with the Hatter facing up, you can find the last two easter eggs.  As I was designing the chair for Alice, I noticed that the cabriole legs looked very  much like flamingos’ necks, which, although they are not in the form of croquet  mallets like in the film, I desperately wanted to include. If you look closely, the  pleats in the chair appear to be the legs and joints and end at the top of the chair at  its crown with the “feet” sticking up. Because I got the opportunity to include the  flamingos in the painting, I couldn’t help but throw in an easter egg from Fantasia  2000—the flamingos with the yo-yo wrapped around their necks. The fifth easter  egg is that of Chip from Beauty and the Beast, because there is no way he was  going to miss out on all the fun of a crazy tea party with the Hatter.

Lastly, and one of the most fun elements to include is perhaps the largest one and  yet often universally missed. The True Neutral in the story and a key character to  the plot is none other than the Cheshire Cat himself. With the painting oriented  with the Hatter and Hare up, the architecture beneath and curving upward around  them becomes the Cheshire Cat’s memorable smile. But there’s more to it than  that. In true Cheshire Cat style, he fades into everything around him. With eyes  slightly blurred to take in the image, the viewer can see that the half cup of tea  becomes the Cat’s nose, the three-spouted teapot becomes his one eye, the head of  the Hatter the second eye, and the retreating tree trunks in the background become  the stripes off the top of the Cheshire Cat’s head.